Surveys-Fiscal Consolidation, External Competitiveness and Monetary Policy: A Reply to the WIIW 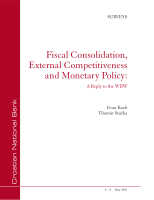 Recent studies of policy alternatives for Croatia prepared by the WIIW contend that fiscal discipline in Croatia remains weak, and argue for a policy mix of tighter fiscal policy and looser monetary policy aimed at achieving nominal exchange rate depreciation. In this reply, we argue that substantial fiscal adjustment is already taking place and that the goal of sustainable fiscal deficits is achievable in the medium term. In addition, we argue that Croatia's trade problems have a great deal to do with problems such as exclusion from free trade areas and domestic, bureaucratic barriers to domestic investment and FDI. Attempts to achieve substantial nominal depreciation, if technically viable at all, may not even create real depreciation. They may also have unacceptable consequences for inflation and even the current account deficit, given the apparently low elasticity of Croatian exports and high dependency on imported intermediate goods.