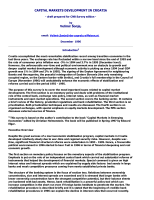 Croatia accomplished the most remarkable stlllbilizatian record among transition economies in the last three years. The exchange rate has ftuctuatad within a narrow band since the end of 1993 and lhe rate of comsumer price inflation was -30/o in 1994 and 3.70/o in 1995 (December level). However, the unfavourable war-time and polltlcal environment was an obstacle ID growth and deeper capitllll market development although economic activity is picking up since 1994 (real GDP growth was 10/o in 1994 and :ZO/o in 1995). The signing of the DaylDn Agreement for neighbouring Bosnia and Herzegovina, lhe peaceful reintegration of !astern S1avonia (lhe only remaining occupied region, an the Eastern border with Serbia), and Croatia's full membership In the Councll of l!urope (November 1996) will undaubtadly enhance Iha economic effac:15 of stabilization and reforms carried out in the period 1992 - 1995.
The purpose of this survey is 1D cover the most important issues related 1D capitllll market development. The tint section is on monetary policy and deals wilh problems of Iha institutional role of the central bank, exchange rate policy, interest rates, as well as financial market Instruments and open market operations. The second section a,vers the banking sec:lor. It contains a brief review of the history, prudential regulations and bank rehabilitllltion. The third section is an privatization. Bath privatization techniques and results are discussed. The fourth section is on organised exchanges, with special emphasis on equity markets development. The fifth section discusses external sources of finance.