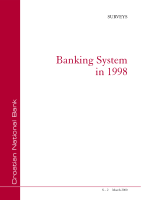 At the end of 1998, 60 banks were trading in Croatia, of which eight were under in majority state ownership and nine in majority foreign ownership. The total assets of all banks was 103 billion kuna, which is a 9.8 percent increase compared to the previous year (assets in 1997 increased by 27.5 percent). The assets of banks under majority state amounted to 38 billion kuna, whereas the assets of banks under majority foreign ownership amounted to 5.8 billion kuna. Four major banks comprised 53 percent of the total assets, as was the case in 1997. At the end of 1998, there were also 36 savings banks in the Croatian banking system, including three building societies. They accounted for only 1.5 percent of the total assets. In 1998 and 1999, considerable changes occurred in the Croatian banking system. Banks with stable trading, could easily be distinguished from those whose expansion was not accompanied by an adequate business policy; this distinction was particularly evident in the recession which hit the Croatian economy. According to the Croatian National Bank’s (CNB) assessment, the banks that made up as much as 80 percent of the Croatian banking market, could be classified into the former group of banks with satisfactory stability. Following a period marked by, on the one hand, the rehabilitation of four major state-owned banks (Slavonska, Rijecka, Splitska, and Privredna banka) burdened to a great extent with the heritage from the previous system, and on the other hand, the establishment of a large number of new banks together with a sudden expansion of banking operations, it become evident that the rapid growth of some banks had no sound basis. These banks thus faced serious problems as soon as the high savings inflow of in the first post-war years decreased and the obligations toward depositors had to be settled by the income from investments of the raised funds. Some banks showed irresponsible management of other entities’ money, sometimes even criminal activity, when granting a large part of their loans to connected persons, without adequate guarantees and concern for recoverability; as a result, they were very soon faced with liquidity problems. In view of the fact that these disturbances were not of a temporary character, and that rehabilitation of such banks at the taxpayers’ expense was unacceptable since it would encourage further moral hazard and malpractice, extreme measures had to be undertaken against some financial institutions, including withdrawal of the operating licence. At the CNB Council proposal, it was decided to initiate bankruptcy proceedings in eight banks were reached (Vukovarska banka, Ilirija banka, Glumina banka, Gradska banka, Komercijalna banka, Zupanjska banka, Neretvansko gospodarska banka, Trgovacko-turisticka banka) in 1998 and 1999. Additionally, after the appointment of a temporary administrator and analysis of the present situation,a rehabilitation process, which is still in progress, was initiated in Dubrovacka banka and Croatia banka. In the cases of some banks where the supervisory authorities had encountered certain operating pro-blems, the central bank appointed its commissioners to assist in eliminating irregularities and stabilising operations. In spite of being unaccustomed to the fact that banks can go bankrupt, the Croatian public has calmly accepted this cleaning up of the banking system. Nevertheless, there was a temporary decrease in kuna and foreign exchange savings between March and May 1999, followed by a slight, but continuous rise in savings in the Croatian banking system. The elimination of the problem banks from the market favouraly influenced supply and demand on the money market, thus reducing interest rates. Management and supervisory boards, as representatives of banks’ owners, are mainly responsible for the implementation of sound operation principles, efficient competition and financial stability. Auditing companies have an important role in the assessment of their performance. The central bank is also to a great extent responsible for the development of effective regulation and supervision of banking operations. However, in order to create a sound and stable banking system and to resolve crises with minimum costs for the public, all institutions responsible for the promotion of market principles, financial discipline and operation legality should act in a coordinated and consistent manner.