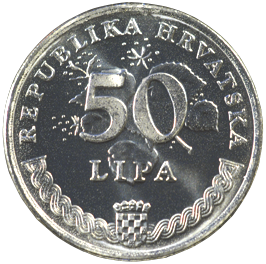 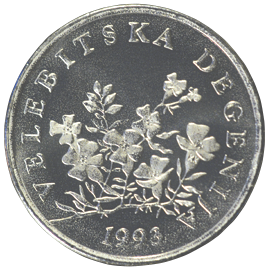 Motif on the obverse: the centre of the coin features the denomination numeral and currency name "50 LIPA" against the background showing a stylised blooming linden branch. The inscription "REPUBLIKA HRVATSKA" is displayed in the upper semi-circle along the edge of the coin. Positioned centrally along the lower edge is the coat of arms of the Republic of Croatia, bordered on its left and right sides by the Croatian wattle.

Motif on the reverse: the centre of the coin features a stylised image of the endemic Velebit Degenia. The inscription "VELEBITSKA DEGENIJA" (Lat. DEGENIA VELEBITICA) is displayed above the image, circularly along the edge of the coin. The minting year is positioned centrally along the lower edge.

VELEBIT DEGENIA
The Velebit degenia, with its narrow leaves and yellow flowers is endemic to Croatia. This extremely rare plant is also the only existing species of the degenia genus. It grows in the notches and stone blocks on a few sites on Velebit mountain. It is named after the Hungarian biologist Arpad Degen, who discovered it in the summer of 1907.