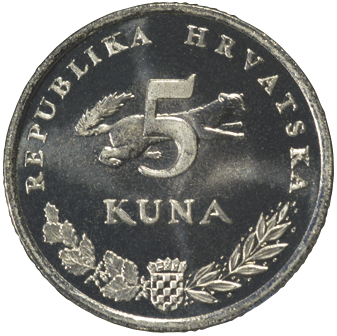 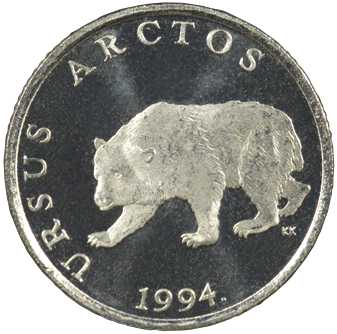 Motif on the obverse: the centre of the coin features the denomination numeral and currency name "5 KUNA" against the background showing a marten, an animal of the weasel family with highly prized fur, running to the right. The inscription "REPUBLIKA HRVATSKA" is displayed in the upper semi-circle along the edge of the coin. Positioned centrally along the lower edge is the coat of arms of the Republic of Croatia, bordered on its left side by a stylised common oak branch with acorns, extending semi-circularly along the edge, and on its right side by a stylised blooming laurel branch, also extending semi-circularly along the edge.

MARTEN
The marten (kuna) is the common motif on the kuna coins. It belongs to the weasel family and lives in forests, rocky areas and open fields. This quick and agile animal has rich dark brown fur with yellow spots on the neck and chest and is a symbol of Croatian monetary history.

GROVE OAK
The common oak, known as the grove oak, is the most valuable forest species in Croatia. It covers an area of 40,000 hectares in the Spačva forest and is a unique single entity with no equal found anywhere else in Europe. Medicinal properties are attributed to it, it is an unavoidable feature of traditional construction work and is particularly prominent as the best barrel-wood. Slavonian oak wood is world-famous. In Slavic mythology, the oak is revered as a sacred tree.

LAUREL
The laurel is an evergreen tree or shrub which thrives in Croatian coastal areas and on the islands. Throughout history, the laurel was a symbol of victory, eternity and immortality. In ancient times it was a treasured and sacred tree whose twigs were seen as a sign of the greatest glory and honour; victors, famous poets and people honoured at celebrations have been crowned with laurel wreaths. The laurel forests in Liburnija surrounding the Lovran area (from which it got its name) are considered to be the most beautiful in the world.

Motif on the reverse: the centre of the coin features a moving brown bear, the largest animal living in Croatia. The minting year is positioned centrally along the lower edge. The inscription "MRKI MEDVJED" (Lat. URSUS ARCTOS) is displayed along the edge of the coin to the left of the minting year, partially circling the image of the bear.

BROWN BEAR
The brown or black bear is a large, strong animal that can weigh up to 300 kilos. It lives most of its life alone, mainly feeding on plants. In order to mark its habitat, the bear will peel the bark of trees, leaving behind its odour and scratches. It is a rare and endangered species which is a part of the Croatian heritage. The Croatian brown bear is a free-roaming wild animal which mainly inhabits the regions of Gorski Kotar and Lika.