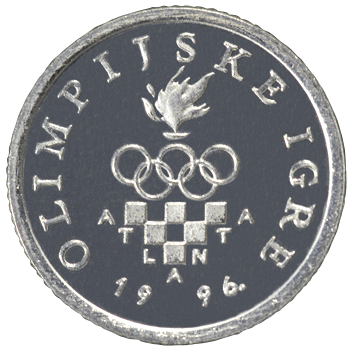 Motif on the obverse: the centre of the coin features the denomination numeral and currency name "1 KUNA" against the background showing a marten, an animal of the weasel family with highly prized fur, running to the right. The inscription "REPUBLIKA HRVATSKA" is displayed in the upper semi-circle along the edge of the coin. Positioned centrally along the lower edge is the coat of arms of the Republic of Croatia, bordered on its left side by a stylised olive branch, extending semi-circularly along the edge, and on its right side by a stylised image of the ears of wheat, also extending semi-circularly along the edge.

Motif on the reverse: The centre of the coin features the Croatian Olympic Committee logo, consisting of the five Olympic rings, with six relief, matte squares and three flat, shiny squares, arranged in three lines below the rings. An image of the pot with the stylised Olympic flame is featured above the Croatian Olympic Committee logo. The inscription ATLANTA" is displayed below the logo along the step-like edge of the squares. The inscription "OLIMPIJSKE IGRE" is laid out circularly along the edge of the coin. The year "1996" is inscribed centrally in the lower semi-circle next to the edge of the coin.