2 kuna - FAO (Food and Agriculture Organization of the United Nations) 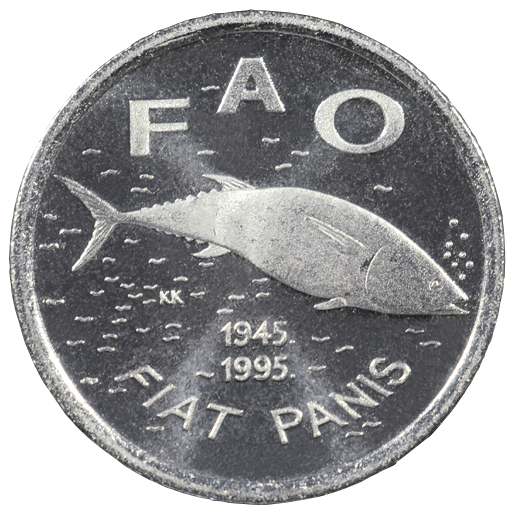 Motif on the obverse: the centre of the coin features the denomination numeral and currency name "2 KUNA" against the background showing a marten, an animal of the weasel family with highly prized fur, running to the right. The inscription "REPUBLIKA HRVATSKA" is displayed in the upper semi-circle along the edge of the coin. Positioned centrally along the lower edge is the coat of arms of the Republic of Croatia, bordered on its left side by a stylised common oak branch with acorns, extending semi-circularly along the edge, and on its right side by a stylised blooming laurel branch, also extending semi-circularly along the edge.

Motif on the reverse: the centre of the coin features a tuna, a large fish of the Scombridae family, against the background showing an array of miniature ornaments symbolising sea water. The inscription "FAO", an acronym standing for the Food and Agriculture Organisation is displayed semi-circularly, above the tuna fish image, while the years "1945." and "1995" are inscribed in two lines below the image. The Latin inscription "FIAT PANIS" (Let there be bread), the FAO motto, is displayed along the edge of the lower semi-circle.

Occasion commemorated: the 50th anniversary of the FAO, Food and Agriculture Organization of the United Nations (1945-1995), dedicated to the eradication of world hunger