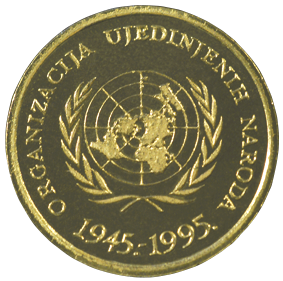 Motif on the reverse: the emblem of the United Nations, featuring a map of the world inscribed in a wreath consisting of stylised branches of the olive tree is placed centrally on the coin obverse. The numbers "1945-1995" are inscribed below the emblem. The inscription "ORGANIZACIJA UJEDINJENIH NARODA" is laid out circularly along the edge of the coin.

Occasion commemorated: the 50th anniversary of the United Nations Organisation, 1945 - 1995