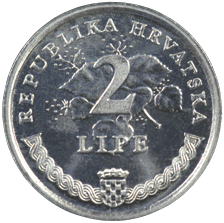 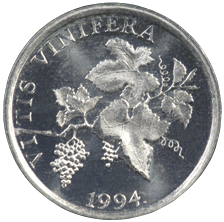 Motif on the obverse: the centre of the coin features the denomination numeral and currency name "2 LIPA" against the background showing a stylised blooming linden branch. The inscription "REPUBLIKA HRVATSKA" is displayed in the upper semi-circle along the edge of the coin. Positioned centrally along the lower edge is the coat of arms of the Republic of Croatia, bordered on its left and right sides by the Croatian wattle.

Motif on the reverse: the centre of the coin features a stylised vine branch with a bunch of grapes. The inscription "VINOVA LOZA" (Lat. VITIS VINIFERA) is displayed above the image, circularly along the edge of the coin. The minting year is positioned centrally along the lower edge.

GRAPEVINE
The grapevine is one of the oldest plants cultivated in this region, present since the time of the Roman Empire. Many indigenous varieties grow to this day, and many local historic records bear witness to the importance of viticulture and winemaking. Thanks to its climatic conditions, Croatia has all five wine-growing zones which makes it one of few countries that can grow a number of high-quality varieties of vines.